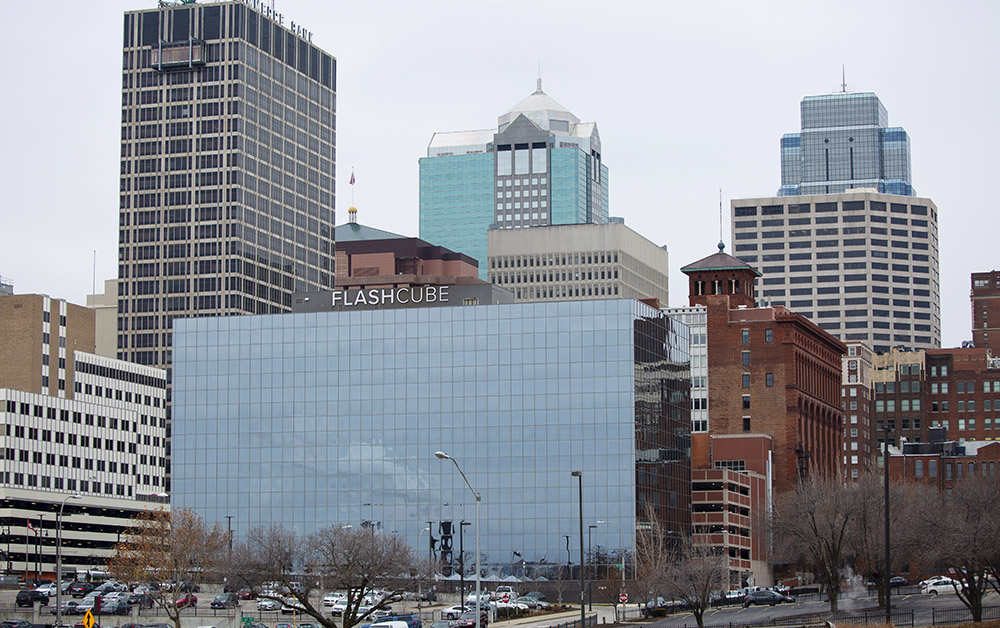 Kansas City’s first all-glass exterior structure, the Flashcube, originally opened its doors in 1974. Named for its resemblance to flash cubes on older cameras, the office building was part of a redevelopment initiative to act as a gateway between the River Market and the commercial core of downtown.

Over the years, the building started to lose tenants, until it was fully vacant by 2006. By the time Worcester Investments stepped in to revitalize the building, it had sat vacant for more than a decade. Opening in 2020, the Flashcube now houses 184 apartments and 17,834 square feet of coworking office space on its first two floors.

Historic tax credits were needed to make the project financially viable. With the building being less than 50 years old when the project started, the process to get the Flashcube listed on the National Register was more involved. Rosin Preservation made the case for the building’s exceptional significance as an early example of the late modern architectural style in Kansas City.

MarksNelson was heavily involved with the Flashcube from the beginning, developing a financial model to help Worcester Investments make decisions during the planning process and ensuring the project would be financially feasible by leveraging state and federal historic tax credits.

“MarksNelson was a great visionary for this thing,” Vice President of Construction Jim Calvert of Worcester Investments said. “It’s a complicated roadmap to navigate through all the historic tax credit issues, state regulations, and the paperwork. They really provided that roadmap for us.”

With the project successfully getting on the National Register, we helped navigate the federal and state historic tax credits needed to complete the project, including navigating legislative changes that arose during the project. We assisted throughout the construction process, vouching the project costs in accordance with state guidelines, analyzing the draws, and more. We worked with the general contractor and Worcester Investments to identify qualified vs. non-qualified costs, helping them understand what we needed to have broken out. This helped outline everything for an easier cost certification process.

Once the project was complete, we helped with cost certification and claiming their federal credits on their tax return. Outlining everything earlier in the process helped Worcester Investments navigate the state review process and helping maximize tax credits.

“It is always a pleasure working with MarksNelson,” Director of Operations Rachel Consolloy at Rosin Preservation said. “Everyone we’ve worked with is so knowledgeable about the process and always so responsive.

The Flashcube has a major footprint as the gateway from downtown to the River Market, breathing new life into the area after being vacant for more than a decade. The building preserved the abstract façade and preserved the spirit of the original design with reflective ceiling tiles in the lobby.

The project was honored with a Preserve Missouri Award in 2021 from the Missouri Preservation. It was also recognized by Engineering News-Record with an Excellence in Sustainability Award in 2021.

Historic tax credits helped realize this project. Curious how leveraging tax credits can bring your next historic project to life? Reach out to us today.