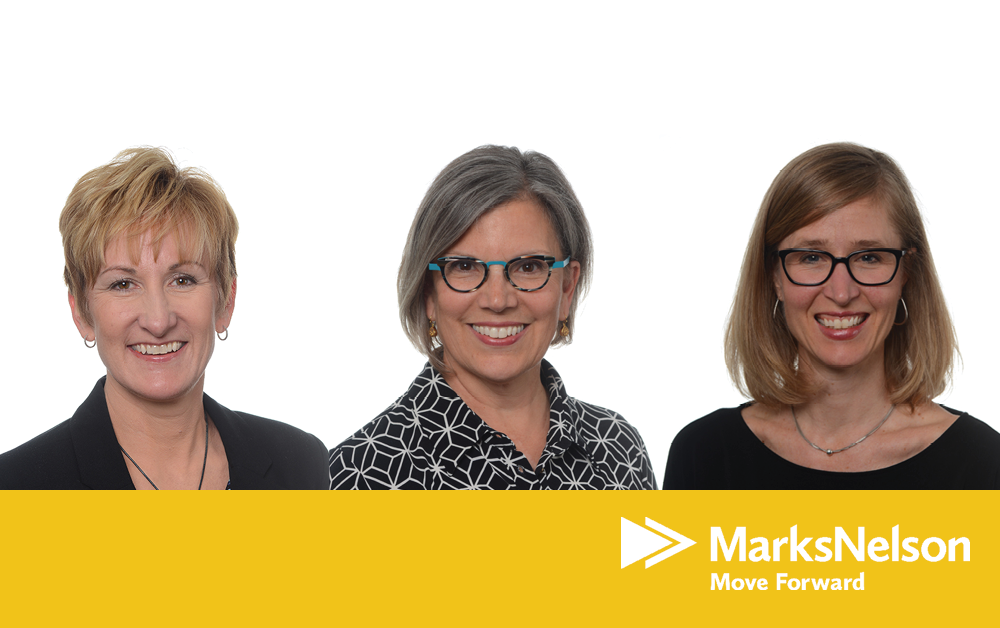 As we celebrate International Women’s Day, we spoke to three of our partners at the firm about what it means to be a woman in a leadership role and how breaking down those barriers benefits us all.

According to Catalyst, a nonprofit that helps build workplaces that work for women, women make up 50 percent of all full-time staff at CPA firms in the United States, but only account for 27 percent of partners and principals. At MarksNelson, we are proud that our total number of female partners more closely aligns with the average percentage of the CPA population as a whole.

Tammy Siegrist, Partner, has been with MarksNelson for 17 years. She was MarksNelson’s first part-time female partner, an accomplishment she is proud of at the firm.

“I love the fact MarksNelson recognizes that women in leadership is important,” Siegrist said. “I think we bring some different thoughts and ideas to the table.”

For Siegrist, she enjoys mentoring individuals and encourages them to “ask for things outside the normal box.” Flexibility in her work was incredibly important for Siegrist, especially when her children were young.

“I wanted a career and I wanted to be a good mom,” Siegrist said. “I remember sitting there thinking, do I have to choose? Because how do you choose?”

Linda Freeman, Partner, joined MarksNelson more than 25 years ago. MarksNelson’s culture drew Freeman in. She felt she had found her home.

“Things have changed a lot and for the better,” Freeman said. “Some of my biggest champions have been the men who had the foresight to know things needed to change. There’s a lot of gratitude thinking back over those times.”

When Freeman started in public accounting, she said the focus was fashioning yourself after the men since women were in the minority.

“You were supposed to blend in,” Freeman recalls. “You were not supposed to stand out. I think we’ve all come a long way since then. Everybody is better off when we have a diverse set of voices.”

When Brandi DiGiorgio, Partner, joined the firm in 2004, she saw women in leadership roles and sought their mentorship.

“I think that was very encouraging,” DiGiorgio said. “When you see someone that can make it to a leadership position, it provides a mentor or coach to go to.”

DiGiorgio’s biggest piece of advice to those coming up in the field is to find a mentor.

“Find someone that you can lean on when you do struggle,” DiGiorgio said. “I look to the women leaders that were there before me and try to pick their brain and lean on them. I would hope that likewise, staff would do so with women leaders now.”

At MarksNelson, we continuously strive to foster an environment of inclusion. We recognize the unique skills and talent in each of us. If you think MarksNelson could be a good fit to move your career forward, learn more here.